He arrived in the name of Michael (or, Soul Friend). It was a little difficult allowing this energy to channel through me, as it were. Channelling Uncle Arthur and Sister Henrietta had been relatively easy; they were neither masculine nor feminine in feeling. However, Soul Friend’s energy was definitely masculine.

His personality made me blush. I felt as though he took over my whole body. Uncle and Sister had felt as though they occupied my mind only. Soul Friend’s energy totally engaged all of my body. The result was a little disconcerting to be sure. He felt more like a lover than a friend.

Over time I got used to this all pervading energy. I learned to adore this man who brought such joy into my life. He presented as a man who performed on stage in William Shakespeare’s era. He wore very fancy clothes of vibrant colours and would sweep his feathered hat from his head down to the floor in a gesture bestowed upon a lady. He made me feel so beautiful. He uplifted my spirits as nobody had ever done. I felt so honoured to have his energy within me whenever he visited. And visit he did; quite often.

It wasn’t long before I longed for him to join me at circles, or counselling sessions. I recall one session with a very lovely young woman who has since become a very valued artist in New York. The love that was engendered between the three of us was so very special. He told her she would become a very famous artist commanding great adoration. This was always the case with Soul Friend; he wooed people with his gallantry and overriding love. He couldn’t be resisted.

We were really more like brother and sister (as a friend pointed out). We had a lot in common. He was a medium and a clairvoyant. We enjoyed all aspects of spiritual healing; he had great hands. People would love to have him place his hands upon them; the energy that could be felt was almost overwhelming. He could bring enormous heat, or cold, to the body, which soothed whatever problem presented.

My daughter had met her husband ‘to be’ and had moved in with him leaving me alone in our little unit. Graham then became a regular visitor and, before long, I too moved out of the unit and in with him. I didn’t want to leave my little unit. My daughter and I had been so very happy there; it was hard to leave all of those memories behind. However, life goes on, and we must travel with it.

Like my first husband, Graham was also a wanderer. We moved to a little country town where we became the leaders of the local Spiritualist Church. We had been attending for a few months when the leaders of the Church informed us they were about to retire. They offered us the leadership, and we agreed.

Soul Friend highlighted this time in my life. Graham and I were called upon to be the medium of the day at certain Spiritualist Churches and he, Soul Friend, presented through me with such great aplomb. How I loved this relationship. He was the lover I’d always longed for; the gallant champion of a man that I’d dreamed about; a whimsical, fascinating lover of life I’d imagined as being my real flesh and blood companion. He spoke with such great love for those to whom he offered his words.

During 1993 he wrote a little book through me about the brain of man; it was titled ‘Know Thyself’. I had a small publishing done and still today have a number of copies. However, this was just the beginning. This little book opened my eyes to the vagaries of the human mind; a long story to be told another day.

Should you wish to continue to read Spiritual Insights – Day 6 here is the link.

One thought on “Spiritual Insights – Day 5”

We Love Hearing From You... Cancel reply

This site uses Akismet to reduce spam. Learn how your comment data is processed.

Welcome to the beginning of our new adventure, Dear Hearts. We shall take you through the steps needed to free yourself of fear. That is right, Dear Ones. There will be many rewards, as our dearest Carolyn will testify. They include calm and a composure not known before. All situations shall become clear as you remove the negatives you carry. Last, but not least, you will see the years falling away as you experience Backwards Aging – one of the many rewards of ridding yourself of fear.

If you would like more understanding of why we are here upon Earth and your purpose, I suggest, Dear One, you begin by reading our Free Downloads 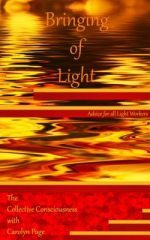 The Reward of Backwards Aging

A Synopsis of Life as a Consciousness

Click to read – A Synopsis of Life as a Consciousness

Varying Experiences Within The Fantasy

Follow ABC of Spirit Talk with Carolyn Page on WordPress.com

Hello, my name is Carolyn Page, and I am a medium representing The Collective Consciousness. My role is to bring awareness of our existence to those who so choose to hear. They, those who choose to hear, are the Light Workers of the world. And what are Light Workers? They are those whose desire is to work upon themselves for the betterment of mankind. There are many new understandings coming for those who choose to hear; changes that shall cause great strife for some, enjoyment for others, fear and rejection for still others. The new is being introduced now because this is as we have arranged it. And who are we? You and I, and the multitude of

souls who are in agreement that, as of now, the falsities under which we have been living are to come to an end. And why are they to come to an end? They are to come to an end because we are no longer in need of them to continue. To explain: As spirit we are perfect. That is, those of us having the experience of the Earth Fantasy are perfect. We enjoy this experience of imperfection, and shall continue to enjoy the experience, as it stands, for some good time to come. However, the changes imminent within the Earth Fantasy are to be this: We, those of us who are enjoying the fantasy of being Light Workers, are to bring about change in the form of love and perfection within ourselves. Note, my friends, we have not said for others. No, this is not to be the case. We, the Light Workers of the
world, are to bring about change, dramatic change, within ourselves. Indeed, we are to work toward attaining the perfected state whilst on Earth. The change, we are here to speak about, is the change toward bringing love and perfection to the Earth Fantasy. Yes, my friends, love and perfection is to replace the havoc, distrust, menace and greed of the Earth Fantasy to date. Should you feel you are a Light Worker; that is, one who needs to be ever growing and developing, you may be interested in learning more. We welcome you to visit our website ‘ABC of Spirit Talk’ where we speak about the changes to come in our free book downloads. We look forward to seeing you there. ©March 2016 Carolyn Page – ABC of Spirit Talk